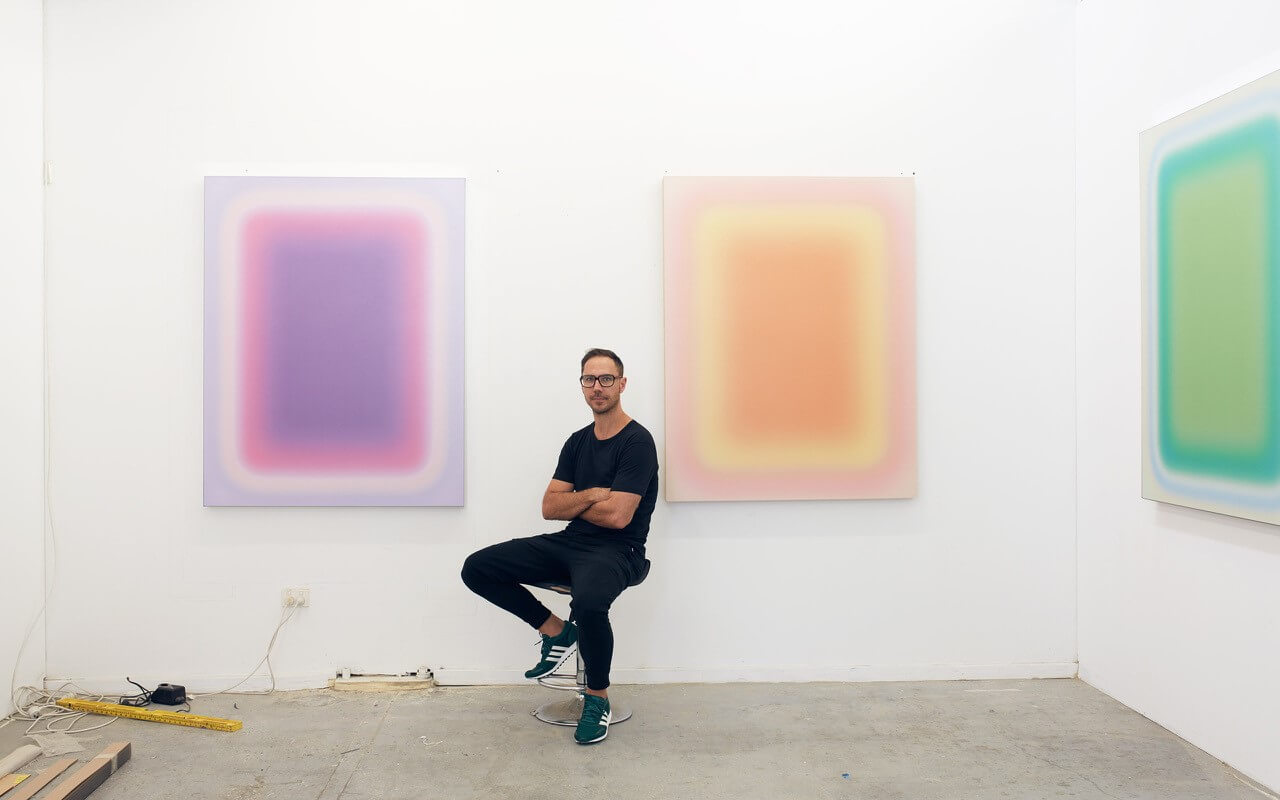 Australian contemporary artist, Jonny Niesche’s work is held in a number of private and public collections, including the Museum of New and Old Art in Hobart, the National Gallery of Victoria and now, at Next Hotel Melbourne. Discover more on his style in the first of our Artist Profiles…

Gaze on any of Jonny Niesche’s paintings and sculptures and you’re drawn by their hypnotic minimalism and a gentle nod to the glitz of 70s glam rock.

Niesche reduces his works to their most fundamental forms: colour, light, and perception. His abstract compositions ooze from the centre outwards in swathes of carefully rendered hues that melt into one another.

He’s often likened to minimalist greats such as Anne Truitt and Donald Judd. Unabashed by comparison though, Neische lists a reel of names from whom he takes inspiration – his university teacher Heimo Sobering, contemporary artist Isa Genzken, and even king of glam rock, David Bowie and – paying homage to his heroes, contemporaries, popular culture and personal experience to forge his own characteristic style.

Niesche uses a variety of techniques and materials including mirrored frames, digital colour palettes (which he makes himself), voile and dye sublimation — a process that uses heat to transfer dye.

Neither see through nor opaque, the objects in his works change depending on the position of the viewer and the source of light, making them  appear as if they float and pulsate, changing from fixed images to dynamic events.

Instead of seeing his works as painting or sculpture, Niesche sees them as ‘image-objects,’ straddling between the two disciplines.

While his aesthetic is incredibly streamlined, his daily practice operates within very open perimeters, working in a communal studio in Sydney that shares equipment and offers supportive artist to artist critique.

He has also worked in collaboration with artists such as Stella Rosa McDonald, author of Blonde (2016), a jauntily poetic text written for Picture This; and Brendan Van Hek, with whom he made but still I wait (2018), an installation for the Sarah Cottier Gallery, as well as collaborating on the Museum of Contemporary Art’s Façade commission for Sydney’s annual Vivid Festival. He’s also exhibited in solo and group exhibitions in Sydney, Melbourne, New York, Los Angeles and Berlin.

Niesche’s regard as an artist that brings a mesmerising and refined glamour to gallery walls has been called on for a special commission for Next Hotel Melbourne. As part of curating a dynamic and engaging collection of artworks by Australian artists to feature throughout the new hotel, Niesche created a suite of pieces to hang in each of the guest rooms.

His signature minimalist works with abstract colour bring an unexpected touch to the Next rooms and suites, complementing the other considered details and residential feel of the interiors.

Guests enjoying The Club for their locale to meet, unwind and refuel will also be welcomed by one of Niesche’s striking large-format works that adds to the sophisticated Manhattan loft-style feel of this space.